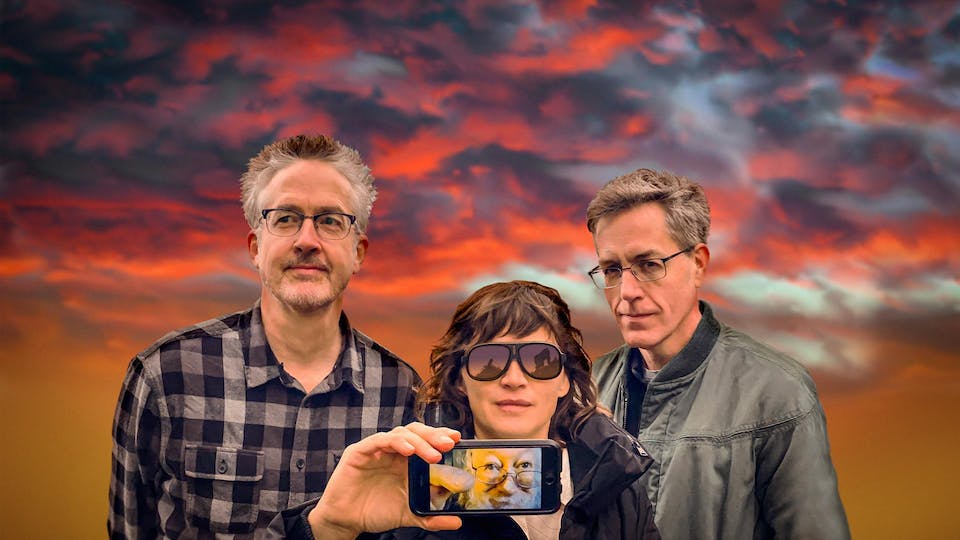 iCal
Google
Negativland at ONCE Ballroom

As much a radical arts organization as a band, Negativland have made a major impact on not only the world of experimental music, but popular culture and mass media as a whole. Similar to composer John Oswald's concept of plunderphonics, Negativland coined the term "culture jamming" to describe their particular brand of subversive media manipulation. Assembling much of their work out of found and re-appropriated material, particularly easily recognizable sounds and images from advertisements and other mainstream media, the group create dense, semi-musical collages which provide surreal commentary on topics ranging from religion to celebrity culture to intellectual property issues. The group's biting sense of humor has always been one of its most crucial assets, and they've received more widespread attention for their hoaxes and media stunts than their actual music, most notably the uproar caused when the band put out a press release falsely linking a song from 1987's Escape from Noise to a real-life murder, or the lengthy debacle following 1991's infamous U2 single. Undaunted by legal troubles, the band have remained tireless advocates for the reform of copyright laws, and they worked with Creative Commons in order to develop the Creative Commons Sampling License in 2004. Negativland have had an incalculable influence on remix and mash-up culture, and by the 2010s, the era of social media, memes, and "fake news," the group's culture jamming techniques had become commonplace, making their work as alarmingly prescient as ever.

Formed in the San Francisco area, Negativland originally revolved around the talents of Mark Hosler and Richard Lyons, multi-instrumentalists with an ear for tape manipulation of all sorts. Their inspired stroke of genius was to recruit David Wills, more famously known as the Weatherman in later years, to make up the original trio. Wills, a cable TV repairman by trade, was just as obsessed with home recording and experimentation as the other two, and his wry, drawling vocals became the core trademark for many of Negativland's most notorious releases. Working with a few guests such as Peter Dayton on guitar, the trio released their debut self-titled release in 1980, notable as much for its packaging (each album featured individually wallpapered covers) as for its fragmented songs and textures. Apparently, the still-teenaged Hosler wanted it completed, in part, so he could feel he had accomplished something by the time he graduated from high school, a reasonable enough goal. Released in 1981, Points featured the same general lineup, with new and notable guest performer Ian Allen, credited with tape processing on one track. However, an even more important bond was made that year, the recruitment of Don Joyce. Joyce had started a free-form radio show, Over the Edge, on the Bay Area's KPFA station that also explored fried humor and social commentary much like Negativland itself. As a result, Hosler and company appeared one day on the show shortly after it began, and since then, Over the Edge has become the regular sonic testing ground for most of the band's releases, still running strong after over 30 years.

The next official Negativland album was the group's unquestionable breakthrough. 1983's A Big 10-8 Place, was created by the core of Hosler, Allen, and Wills, with Lyons and Joyce as guests, along with a new face, Chris Grigg. Synthesizing the band's love of aural theater and the subversion of expected pop and rock approaches, it was at once a hilarious and quietly harrowing vivisection of suburbia, winning the band new fans and a growing reputation. Allen formerly departed after that point, while Joyce and Grigg became full-fledged members. The ensuing five-piece lineup -- Grigg, Hosler, Joyce, Lyons, and Wills -- kept up their various explorations on the air and in the studio, not to mention irregular but creative and well-received live performances and occasional dabbling in video work. Their reputation grew to the point where they were formally signed to Greg Ginn's legendary punk label SST, a decision that would have unexpected consequences some time later.

The band saw out the '80s with two major releases on SST, not counting a variety of tape-only efforts showcasing some of the best Over the Edge sessions. Issued in 1987, Escape from Noise took the scope of A Big 10-8 Place to even wider levels, touching on everything from how many time zones Russia covers to a rendition of "Over the Rainbow" sung by a little girl plagued with hiccups. Maintaining Negativland's blend of wit and darker themes, it might have simply remained a cult classic were it not for the appearance of the throbbing, creepy "Christianity Is Stupid" and, a few months after the album's release, a mass murder in Minnesota committed by a teenager against his family. Having tour plans fall through at around the same time, Negativland decided to distribute a fake press release hinting that the killer had in fact been arguing with his parents over "Christianity Is Stupid," which resulted in a slew of publicity and confusion over what the truth of the situation was. Some condemned the group's actions as tasteless exploitation, but Negativland preferred to think of it as an examination of media assumptions, and the whole affair became the backbone of 1989's Helter Stupid.

As if the storm of controversy over "Christianity Is Stupid" wasn't hectic enough, what the band did next was nearly enough to do themselves in permanently. With barely any advance publicity -- but all too suspiciously timed to appear just before U2's long-awaited 1991 album Achtung Baby -- Negativland (with Lyons taking a temporary break) let a two-song single slip out in the summer of that year called U2. The contents turned out to be two radically different versions of the Irish band's anthem "I Still Haven't Found What I'm Looking For," using and chopping up the original beyond recognition, as well as splicing in bits from a notorious underground tape featuring legendary American DJ Casey Kasem obscenely ranting about nearly everything.

What happened over the next few months is still the subject of legal threats on all sides, but first U2's label crashed down hard on the release, forcing it to be withdrawn after only a few days of being in the stores (all of which occurred without the knowledge of U2's members themselves, by all accounts). Kasem found out what happened as well and launched his own lawyers into the fray. Things got even more hairy for the band when SST suddenly turned on the group, with Ginn seeking to recoup his financial losses via the bandmembers (even as a follow-up EP, Guns, slipped out). The ensuing barrage of claims and counterclaims, documented first in the band's 1992 CD/book The Letter U and the Numeral 2, and then in even more detail three years later in an expanded release called Fair Use, found Negativland beset by legal and monetary woes that almost sank them. At the same time, what had been a joke and a dare soon became a new focus for the bandmembers, who inadvertently made a name for themselves as crusaders for both artistic integrity and a freer interpretation of copyright law in opposition to corporate control.

This fresh direction, though one which grew naturally out of Negativland's previous work, helped reinvigorate the group, which reactivated the Seeland label with the release of Free in 1993. Accompanying tours found the band delivering both older hits (if you will) and extended meditations on the whole U2 saga (a notable though unofficial release, Negativconcertland, presented a typical show over its two discs). Perhaps most notable of all was Wills' live work -- for any number of rumored personal reasons, he refused to tour, so the band did the next best thing and simply videotaped his parts for playback.

After further extricating itself as much as they could from the matter, as well as completely severing all links with Ginn and SST, Negativland kept on keeping on. Joyce's Over the Edge show continued as always, with an increasing number of old and new shows edited for presentation as formal releases, though 1996 brought the departure of Grigg from the band. Negativland's next formal release in 1997 looked to be another red-flag-to-the-bull effort, though whether out of foolhardiness or calculation is unknown. Regardless, Dispepsi, featuring the guest contributions of newest member Peter Conheim, didn't bring down the wrath of Pepsi-Cola on the band's head, even though the cover art was clearly a riff on the company's distinctive logo, while the content explored the very concept of advertising and its potentially destructive nature. 1998 featured a follow-up EP, Happy Heroes, while the following year saw the appearance of a full collaborative single with British radical stalwarts (and longtime Negativland fans) Chumbawamba, The ABCs of Anarchism.

The turn of the millennium ushered in a new, if generally lower-key, era to Negativland, with the group's most notable later work being a well-received tour, True/False 2000, featuring much newer material as well as an old standby or two, not to mention some amazingly nutty between-set skits and films (and, as always, Wills only turning up on video). In 2001, the band released a sort-of bootleg, These Guys Are from England and Who Gives a Shit, revisiting the whole U2 blow-up with numerous alternate versions (and the originals) of Negativland's most (in)famous effort. The following year saw the release of Death Sentences of the Polished and Structurally Weak, and in 2005 the band issued No Business and celebrated its 25th anniversary by curating an art exhibit in New York City called Negativlandland, which contained artwork inspired by the band's music, as well as Negativland music videos and original art created specifically for the event. Three years later, Thigmotactic, a full-fledged venture into songwriting, was released on Seeland. In 2014, Negativland and Seeland released one of their most ambitious projects, It's All in Your Head, a concept piece about the practice of religion and why people place their faith in a supreme being. The album was packaged in a specially repurposed King James Bible. Former member Ian Allen died from complications related to heart-valve replacement surgery in January 2015 at the age of 56. In July of that same year, Don Joyce died of heart failure; he was 71 years old. Another death in the Negativland family occurred on April 19, 2016, when Richard Lyons passed away due to complications of nodular melanoma on his 57th birthday. In October of that year, Negativland released The Chopping Channel, the ninth volume of CDs culled from Over the Edge broadcasts. Recorded before Joyce's death, he appears prominently on the album, and early pre-orders from the band's website were shipped out with audio carts he used during the broadcasts, as well as small samples of his cremated remains. True False, the first of two interconnected studio albums, was released in October of 2019. ~ Ned Raggett, Rovi