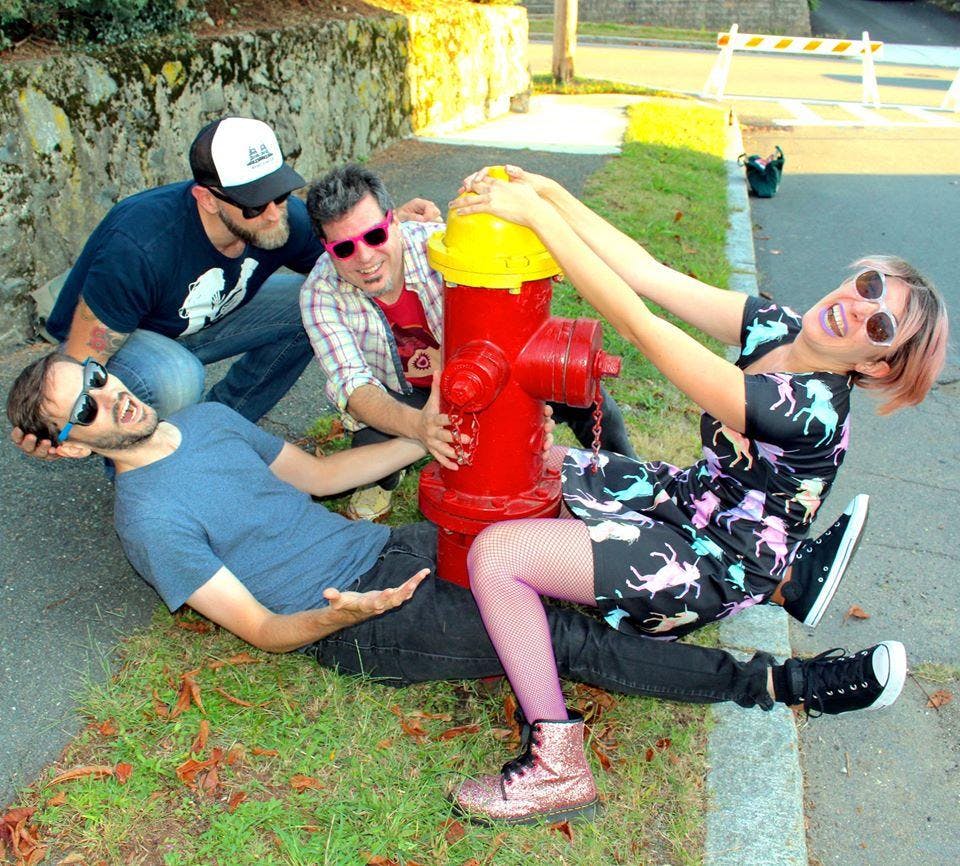 the release of their third full-length album

Record release party: February 29, 2020 at ONCE Somerville as part of the WhistleStop Rock Festival

PowerSlut channels punk, hardcore, indie rock, grunge, riot grrl and disco into an irreverent mix that celebrates freedom and sex-positivity. They've put out quite a lot: two full-length offerings (With Great Power Comes Great Slut in 2014 and The Second Coming in 2016) and an EP (aptly titled Go Fuck Myself and released on packets of flavored lube, now expired, but we hear the music is still good). They were finalists of the 2019 Rock & Roll Rumble, where their unflinching down-and-dirty jams were deemed "a living, shredding act of both reclamation and destigmatization" (Victoria Wasylak, Vanyaland).

Their third studio album “Fun with Junk” explores the dark side of desire. Musically, it veers from punk thrash to anthemic indie rock to fuzz-washed guitar riffs and dirty funk grooves—and that’s just the first five songs. It deceives you (the opening track “Whip It Out” isn’t about exposing your junk so much as exposing your flaws) and takes you for a ride past hotel rooms, up creaky loading elevators, until the walk home with the floating afterimage of blue lights in your eyelids. Recorded at Mad Oak Studios, New Alliance Audio, The Noise Floor, and Project Sound, this incarnation of PowerSlut (with founding members Linnea Herzog and John Bragg on guitars and vox, Matthew Girard on bass, and Mark Enet on drums) has defied all odds to present to you the best possible versions of these songs.

Nine of New England’s best rock bands have united to form a traveling festival, and we’ll be in your town before you know it. The bands are: The Chelsea Curve, Cold Expectations, Field Day, Heather Rose In Clover, Justine and The Unclean, Kid Gulliver, The Knock Ups, PowerSlut, and Tiger Bomb. With additional special guests at each venue, such as Lockette and brand new Jennifer D’Angora/Dan Kopko/Lee Harrington outfit The Shang-Hi-Los.

Ever had a monstrously fabulous, gargantuan idea?

When Simone Berk (Kid Gulliver and Sugar Snow) sent a message to a group of friends whose bands she felt a connection with, to ask about doing a show together, she had no idea what she was setting in motion: a show that would grow quickly in size, scope, and spectacle. All of the women on the group message started exchanging ideas, and suddenly, they realized they ALL needed to play on the same bill, together. And they also realized that no one town could contain their power-pop-punk-rock-and-roll high energy. This show needed to hit the road!

Thus, the WhistleStop Rock Festival was born, and it’s coming soon to a club near you.

All aboard, folks! Stopping in:

. . . .and more regional dates to be announced!